How can a colour speak to a point in time? Timo Peach suggests it all depends how you wear it.

I am about to dramatically repaint.

When I ventured out on my own twenty years ago, I just knew Momo was orange.

Very specifically, Pantone 172. Vibrant but warm, with a hint of peachy-pink that seemed bang on brand for a creative business literally named after the fruit.

And a colour I could in no way live with environmentally, not if I didn’t want daily headaches. So I turned a painful blind eye to the inconsistency of it for a bloke trading on being a brand developer and tried tens of other oranges on the walls of the studio. The friendly, fruity dusty equatorial hue I eventually found had a frequency so nice to work in I even painted the new studio in the exact tone when I moved into it ten years ago – which means every piece of music, design, copy, every idea, every essay, every studio film was created surrounded by that comforting colour.

But somewhere around 2016 I simply found myself turning Momo magenta.

Everything. And I don’t know why. I did it on brainless instinct, which isn’t something I do anywhere near as much as you might think.

It stemmed from the project that turned me towards a whole new life as a creative – The Shape of Things To Hum. Ostensibly my third personal album of electro-beat tomfoolery, playfully exploring the many worlds of science fiction, I felt it grow into something else quickly. Something very pink.

So I made a brand bible of it. A crafted scrapbook thesis of sci-fi visions, moments, visual languages… all seen through a bright cerise filter.

Now at last Tracey Follows is telling me this is going to be my year.

Her article on this news, below, had me frozen at the story. And in it she identifies Viva Magenta as essentially a colour of gad-awful un-nature.

“Magenta and magic. There is certainly something to that. Magenta, like a virus, may well have been created in a lab, released into a world it is not part of. More experimental than experienced, more printed than lived” she says.

In the iterations of music and experiences Things To Hum has so far led me to, that total hot pink has not lost its resonance with me. It still feels right in all the branding still coming out of me for the plans I have for it in 2023 – including the new logo for the whole project, revealed in a special UTF episode out this week. And there it is, the words drawing themselves over the whole of space… washed with Viva Magenta.

Viva Magenta “writes a new narrative” Pantone apparently declares; “The shock of the artificial… something that feels alien” as Tracy puts it.

So I’d already decided, put it in my diary.

To step up – and repaint the studio from that beloved old normal orange. To hot pink. To disturb me sufficiently every day into new work for our disturbing times.

And amid my plans, I had been already been sketching out and researching my costume for the central character and voice of all the creative pieces coming, the Ghost of Future Shock.

All I can say here is, expect to see pics of me dressed very much as the Queen is below.

Magenta and magic? The meaning is in what you haven’t seen.

NB: For me it’s not Elvis, it’s Dana International – but Vive la differénce. 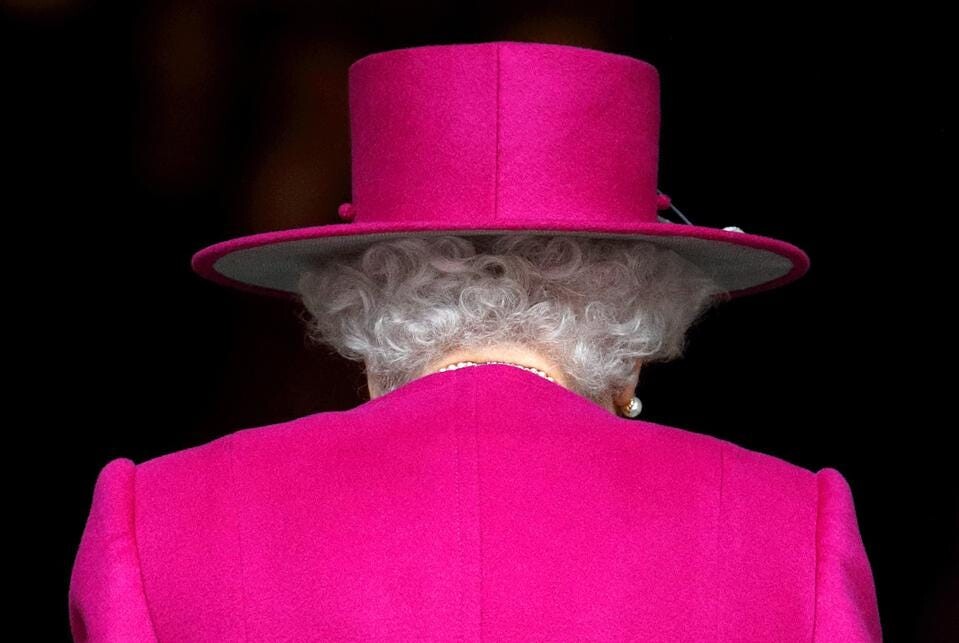